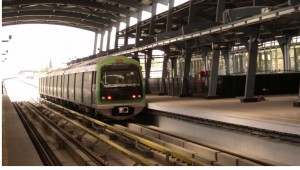 Bengaluru witnessed the launch of the second Phase (3 and 3a) of its “Namma Metro” by Chief Minister Siddaramaiah and the Union Railway Minister, Mallikarjun Kharge. The new phase is running on the ‘green line’ that is a 10.3 km track and is different from the ‘purple line’ that opened partly in 2011 (6.7 km from Byappanahalli to M.G Road). The new track connects the city’s North Western suburbs in Peenya to Sampige Road. Commercial operations on this line began on March 1, 2014.

However, as per a Metro official, the remaining stretch of the ‘green line’, 2.5 km from Peenya to Nagasandra and 4kms of underground tunneling from Sampige Road to National College, is expected to be completed by October, 2014. Both the green and the purple line will connect after the Sampige Road Station. Urban and Land Transport and District in-charge, Minister Ramalinga Reddy, stated that the last train will run at 11pm unlike the last 10pm train that runs from MG Road to Byappanahalli.

The 10km Sampige Road to Peenya stretch hosts three-coach trains with a carrying capacity of 975 passengers. These trains run at a speed of 80 km per hour with a 30 second halt at each station. They now run at intervals of 10 minutes and will change timings based on the number of commuters. Now commuters can cover the distance, which takes 45 minutes by road, in just 18 minutes. Also, the tickets issued by Metro are cheaper when compared to the BMTC charges and commuters using a smart card can avail a 17% discount. Today, a Metro commuter has to pay a maximum fare of Rs.23 and a minimum of Rs.10 , Making it more convenient for commuters, a dedicated shuttle service has been implemented from Sampige Road Station to Majestic. Other services implemented by Metro include:

Since its launch in 2011, one of the major impacts of the Metro on the city’s real estate has been in terms of connectivity that led to a considerable increase in the real estate prices along the route. There have been a large number of residential as well as commercial projects sprouting not just near the Metro route areas but also in the peripheral areas. Therefore, property prices along the new Peenya and the Sampige Road Metro line are also expected to increase in the coming few days. Various builders are also coming up with new projects along the Metro lines.
As per various real estate consultants, property prices along the MG Road ? Byappanahalli route increased by 60 to 100 percent in just 2 years. Due to the increased property appreciation, a large number of property owners are just renting their homes rather than selling them.

As the Metro develops, the project will consume more and more space in the city. About 200 hectares of land is required for the completion of the project, including underground stations, three depots and viaducts. The three depots are proposed at Hebbagodi, Gottigere and Kengeri. The KIADB (Karnataka Industrial Area Development Board) is acquiring the land for the BMRCL by issuing preliminary notifications for 36 hectares of land.