Sections of developers and home buyers are disappointed that the authority is acting more like another urban civic body rather than learning from KERC.

BENGALURU: When the state government set up the Karnataka Real Estate Regulatory Authority (KRERA), it came as a bundle of relief for home buyers. But three months into its functioning, the regulator appears to have become another arm of bureaucracy, failing to live up to people’s expectations.

Set up to enforce the Real Estate (Regulation and Development) Act, 2016, it is inviting the wrath of home buyers -whose interests it is expected to protect ­ and developers who are required to register with the authority. To start with, the authority has approved only 600 of the 1,600 applications for projects it has received from developers. Sections of developers and home buyers are disappointed that the authority is acting more like another urban civic body rather than learning the ropes from the likes of KERC.

MS Shankar, who heads Fight for RERA’s Karnataka Chapter, said the authority received 700 applications in the very first week of its inception. In the past three months, it received 900 applications.

“As per an estimate, the number of ongoing projects in Bengaluru that are eligible to be registered under RERA are 5,000. Going by that estimate, the compliance rate is low and the registration process is extremely slow,“ Shankar said. Although applications ought to be cleared in 30 days, they are taking much longer, he said.

Is it BDA by Another Name? Whom does KRERA help?
Real Estate (Regulation and Development) Act, 2016 is a customer-centric Act which aims to protect home buyers and encourage genuine private players in the real estate sector 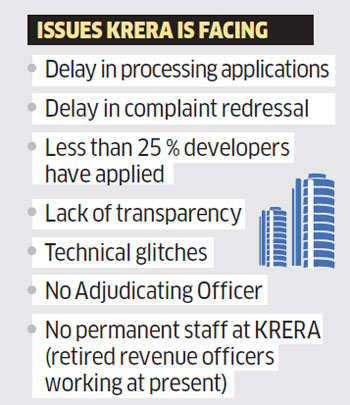 The authority, expressly meant to protect home buyers from unscrupulous builders, has done little to help prospective buyers verify the antecedents of the city’s developers. For instance, it has not put out any information on the registered developers in the public domain.

Non-redressal of consumers’ complaints has also irked many prospective buyers. While KRERA has received 85 complaints, none of them have been disposed of. KRERA rules mandate that complaints be disposed of within 60 days.

Nagesh Aras, a citizen activist, pointed out that the authority has not appointed an adjudicating officer. “The government is not serious about implementing RERA. The delay in making it a fully functional authority reflects lethargy,“ he observed.

Suresh Hari, secretary of the Confederation of the Real Estate Developers’ Association of India (Bengaluru), said RERA in Karnataka is “acting like a parallel sanctioning authority“. Apparently, the KRERA asks builders for “unnecessary documents“ and scrutinises everything before approving registration. “RERA’s job is not to authorise the project but to ensure that the project is registered under the KRERA,“ he said. This had only encouraged developers to adopt a “wait and watch policy“, he said.

RERA officials blame the developers for submitting “incomplete documents“. An official said: “We are not rejecting any application and are quite lenient towards developers since the law is new.“