Home » News » Living in a flat without OC? You may lose power

Rajini Chengappa, 58, and husband Vivek, 65, bought a flat in Kodigehalli, off Hebbal, in 2012.They moved into the sixthfloor flat a year later. 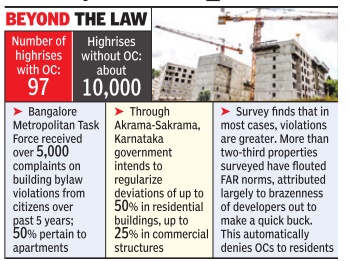 The builder, Vivek says, had promised them an occupancy certificate (OC), but it has remained a promise. The Chengappas are not alone in their plight. Thousands of homeowners are facing a similar quandary .

Nearly 10,000 buildings in Bengaluru, including 50% of apartments built after the Karnataka government introduced transfer of development rights (TDR) in the city in 2005, do not have OCs, say official sources. In many cases, though the building plans are approved, OCs are denied due to other violations. Obtaining an OC is a requirement under the Karnataka Apartment Ownership Act, 1972.

The law says one cannot legally move into a building unless the developer gets an occupancy certificate from the BBMP or BDA. The corporation can ask apartment owners to leave such illegally occupied flats or im pose heavy penalties.

Replying to a question at the recent Belagavi assembly session, chief minister Siddaramaiah had said only 97 highrises in Bengaluru have obtained OCs between 2009 and 2014, while promising stern action against builders violating construction norms.

Energy minister DK Shiva Kumar echoed similar views and directed officials to get tough with apartment builders, by disconnecting power. But it’s not as easy as it seems, considering the quantum of violations, nexus between civic officials and builders and a lack of stringent laws.Many errant builders and developers have, over the years, gone scot-free, say those familiar with the working of the sector.

There are several examples of builders disappearing without giving OCs and legal water connections to housing complexes.

Apprehensive of losing their homes, buyers who’ve invested hard-earned money move into their flats and make do with water from pumps and water tankers.

So why are such illegal buildings mushrooming in Bengaluru? Urban expert V Ravichander attributes it to a breakdown of the system and lack of transparency.

“There was a good system in place a decade ago. Following a real estate boom, unscrupulous builders began construction without approved plans, in an effort to increase profits. This not only broke down the system, but also fuelled corruption.”

The bigger problem, says RTI activist BM Shivakumar, is that in the absence of well laid-down regulations, a person can get into the real estate business and start construction of a project without approvals or environmental clearances.?Why blame private builders? Many BDA flats owners have not got OCs after due to failure to obtain environmental clearance,” he alleged.

Some experts and activists, however, expect such malpractices will be curtailed after the Real Estate (Regulation and Development) Bill 2013, is implemented. They believe it will rein in the strong builder lobby, even if it cannot control it completely.

Ravichander favours a retrospective and comprehensive policy to regularize buildings without OCs.

Architect G Ramesh says occupants must be allowed to approach the BBMP and BDA and apply for OCs after paying a certain compensation. The corporation must facilitate the process, he added.

Like all good laws, city builders seem to take the occupancy certificate lightly. The certificate, which declares the building has met all requirements of safety and construction rules, should, in fact, be one of the most important property documents. Things have come to such a pass because of the nexus between BBMP officials and builders: the deal includes violation of bylaws, money exchanges hands and both cheerfully ignore the OC.It’s the occupants who are vulnerable. With the government viewing the issue with seriousness, and the real estate law to be implemented, city dwellers will have to wait and watch.