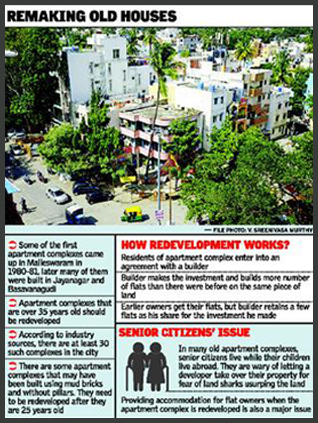 But redeveloping an apartment complex in the city has now turned into a hurdle race where none has even begun to see the finishing line. One of the major lacunae facing these residents is lack of proper guidelines which they fear will expose them to land sharks with no legal guarantees.

Industry sources said that at least 30 apartment complexes, most of them in Malleshwaram, Basavanagudi and other south Bengaluru areas, need redevelopment. However, a host of hurdles and fears have left the residents paralysed into inaction.

The Hindu visited three such apartment complexes whose residents are contemplating redevelopment. The complexes are occupied mostly by senior citizens who are wary of allowing anybody in for concerns about their economic safety. “To redevelop the property we need to get into an agreement with a builder. We don’t feel confident that we can safely handle this without losing our property,” a resident said seeking anonymity. The apartment he is in has already come in the crosshairs of builders.

Currently, such a joint development agreement is considered risky as the residents cannot pool their ownership to enter into the agreement as one entity. Instead, they will have to cancel their sale deeds, and revert their land to the previous owner. R. Ramesh, a real estate consultant working with at least two such apartments, said that amendments need to be made on the lines of guidelines being followed in Mumbai.

What is surprising is that even after around 35 years since apartments have adorned the skyline of the city, the city’s planners and civic bodies have not laid down any guidelines for redevelopment of old apartment complexes. “We are about to complete one circle of apartments in the city. It is high time that guidelines be framed for redevelopment,” said Suresh Hari of CREDAI, Bengaluru.